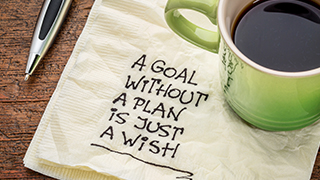 It has been two years since Jason moved out of his parents’ home in Point Fortin into an apartment in Port of Spain. With a very busy work schedule he only sees his family a few months at a time and when he does his mom loads him up with containers of frozen food and a handful of mail.  He returns to his cave and the letters join the piles of unopened ones on his kitchen table.  Some days ago whilst warming up his food, he randomly opened one of the envelopes; to his distress it was the renewal notice for his car insurance for $8,400 and it was due in fifteen days.

With barely a thousand dollars in his savings account and owing the maximum of $25,000 on his credit card after a trip to Florida, Jason scarcely has any good options to fix this problem.  He breathes relief after opening another envelope that is offering an unsecured loan of $30,000 with payments of $1,499 over four years.  Whilst this is more than he needed for the car insurance, he remembered he also has MBA fees of $7,500 coming up in two months and then again in six months time. He also has quarterly car service of $1,500 due now which he was planning to defer until he had the money.

The ironic with Jason’s situation is that out of all of his twenty something year-old friends; he is the highest paid but the one with the most money woes.

Sick and tired of juggling bills for so long, not to mention these so called unexpected expenses, Jason wants is trying to understand the real reason behind his problem and how best to break free from this cycle of living paycheck to paycheck.

HAVE MONEY WILL SPEND

It is a paradox that the more money we earn, the more we tend to spend.  A friend of mine is famous for saying, “expenses expand to meet income”.  One would automatically assume that higher income earners would naturally save more money but I have found that when measured as a proportion of income many of these persons actually save the same or even a smaller percentage of their total income when compared to their lower income counterparts.

Thomas J Stanley in his book: “The Millionaire Mind” did a survey of 733 millionaires asking them 277 questions and made a distinction between persons he called Income Statement Affluent (ISA) and the true wealthy called Balance Sheet Affluent (BSA).  Whilst higher income is a definite contributor to building wealth faster, the choice of lifestyle is the key determinant.  Jason’s lifestyle not only caused him to spend everything he earns but even more as evidenced by the high credit card debt and his lack of savings.

From the looks of it Jason does not operate with a monthly budget and far less a periodic expense budget for annual expenses.  He probably starts spending as soon as salary hits his account and when the money dwindles he pulls back, runs up debt or goes into expense starvation mode. This is not healthy and is also a formula for financial crisis.

Jason needs a lot of money fairly quickly and not having his own he is forced accept ridiculous terms to get it. The loan of $30,000 with installments of $1,499 for forty-eight (48) months translates to an annual interest rate of fifty-two per cent (52.19%).  This is most likely higher than what he is paying on his credit card – probably half of that and still too high.  He might be better off approaching another lender to wrap the credit card debt together with the money needed for car insurance and school fees at a lower overall interest rate and spread across a shorter term.

Even after doing this Jason still needs to simultaneously address his periodic expenses for the following twelve months.  He has to convert the annual figures into a monthly figure then set this aside so he can pay them without stress.  School fees twice per year of $15,000, car insurance of $8,400 and car servicing $6,000 annually Jason needs to divert $2,450 into a separate savings account.

By removing these monthly allocations from salary he has less money to spend on daily expenses and impulse purchases.  He still needs to write a monthly budget to divvy up the remaining salary into savings and the various expense categories according to priority. He can then put these amounts into separate cash envelopes to keep control.

Failing to plan is a plan to fail.  Persons who take the time to write down details of their finances that includes a budget are more likely to achieve financial success.