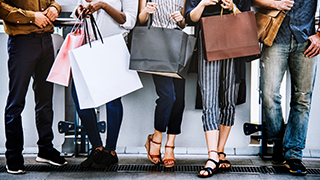 Fresh out of high school Suzette shocked everyone when she declared that she would not be going to university on a full scholarship to study engineering.  Instead she cashed out all of her savings and dove headlong into an online clothing store that targets young women.  Armed with the knowledge about the secrets of what her peers loved to buy, she rapidly built a following of over ten thousand customers with average gross sales of $60,000 per month. Her net profit margin hovered around thirty per cent, so she was making more money than she knew what to do with. She would reinvest most of her earnings into inventory, constantly switching things around and boosting social media ads to keep her audience plugged in for new arrivals.

With things going wonderfully well, Suzette dressed back a bit to enjoy the fruits of her labor.  Her lifestyle inflated extraordinarily, after her bank threw her a credit card with $100,000 of “free money” plus bonus airline miles.  She started spending liberally, frequently picking up the dinner tabs for friends who were still in university.  Retail therapy felt good, particularly after months of twelve-hour days behind her laptop.

Unexpectedly a series of events sought to threaten to her business. Suppliers discontinued her best lines then hiked prices; shipping became a problem, foreign exchange tightened and sales tapered down without warning.  Suzette’s retail spending came to an abrupt halt when the credit card reached its maximum and the debt refused to budge.  As the situation worsened she found herself surrounded by boxes of unsold goods so she started selling off items below cost just to keep the cash flowing.

Undaunted by the reversal of fortunes and knowing she started with nothing; Suzette is working her way back to her former glory, this time with the wisdom acquired from past mistakes.

In his book: “Why we buy: The science of Shopping” Paco Underhill (CEO of Envirosell a New York City-based research consulting company that studies the interaction between customers and their environment) stated:

“Women are an important part of the consumer economy. Pay attention to them.”

It seems paradoxical that Suzette who sells primarily to women in an online setting has paradoxically fallen prey to the power of offline retail therapy (Dictionary definition: “The practice of shopping in order to make oneself feel more cheerful.”

I encountered Underhill’s book about ten years ago whilst researching ways to help my clients stick to their budgets.  Prior to reading the material I couldn’t understand why even the most financially astute persons were struggling with spending challenges.  Initially I ascribed the lion’s share of the blame to discipline, but I soon found out that the problem went much deeper; into the subconscious.

Underhill’s company helps capture, analyze and harness consumer behaviour data in order to orchestrate the shopping experience to increase sales. As fate would have it his (corporate) clients’ success redounded to my “temporary” failure as a financial coach.

Dave Ramsey; a popular US financial personality, says that: “financial success is twenty per cent (20%) head knowledge and eighty per cent (80%) behaviour.”

With the spate of recent retrenchments and corporate downsizings, many persons may find themselves facing situations not dissimilar to Suzette’s. Self-employed persons may have a fighting chance as they could manipulate some of the variables to stay afloat.  But for persons who have experienced a total loss of income, with heavy debts; dramatic adjustments must be made to preserve cash resources until income starts flowing again.

For persons still gainfully employed, they need to get to the root of the spending problem and “nip it in the bud”.  Most of the work centers on becoming more conscious about the barrage of advertising messages, sales tricks, product placements and stimuli that appeal to the five senses and emotions.

Underhill: “Remember that more than 60 percent of what we buy wasn’t on our list.”

I somewhat disagree with him on this point because in practice lists are effective, as long as you refer to them on the shopping expedition – in addition to wearing blinders, earplugs, nose clips, keeping hands in pockets, eating before going out and limiting use of credit cards.  To ensure that these tactics are effective, ask the question: “Is this a need or a want?” If this doesn’t work then reframe the question: “Can I live without this purchase” or “Will I die if I don’t purchase it?”

Life, business and finances are unpredictable so develop the ability to adjust to change and learn from mistakes for financial success is within your reach.